REBRAND RACIST MASCOTS
​Rebrand Racist Mascots is a grassroots advocacy group started by Josh Silver, Ian Washburn, and Bill Mosley. We achieved victory when the Washington football team changed its name but now we are fighting other racist mascots. 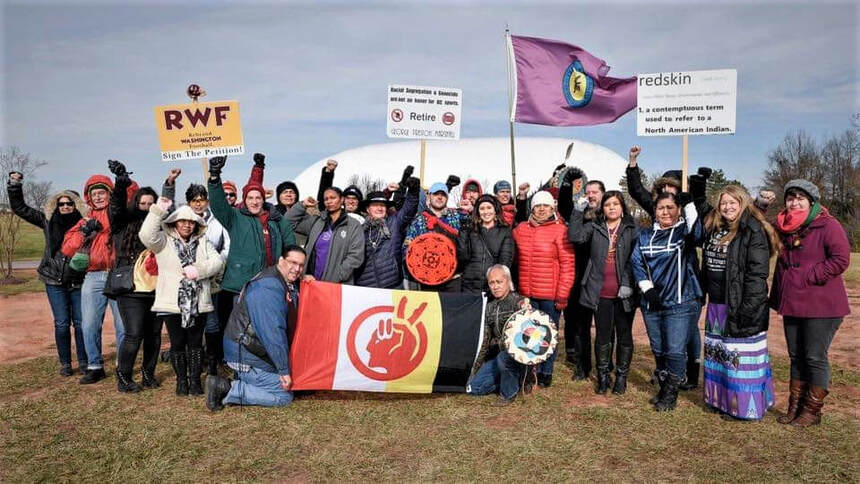 One of the co-founders, Josh Silver, grew up in Bethesda, MD. He witnessed the Washington-Miami Superbowl in 1973 as a nine year old boy and became hooked as a fan thereafter. As a fifth grader, he bought the line that the name honored Native Americans and that it was desirable to be the underdog when a team with a Native American name played the Cowboys (who usually won in those years). He did not understand issues associated with cultural appropriation or misuse of Native American cultures and religion. This is why using Native Americans or any ethnicity as mascots is dangerous as it leads to the miseducation of children. As he grew up, Josh came to understand how he would feel as a Jew if a team mascot and cheerleaders pranced around singing Jewish prayers and wearing Jewish religious symbols but desecrating the sacred meaning of these traditions.
As a teenager and young adult, Josh experienced cognitive dissonance. The team during the era of Coach Joe Gibbs won Superbowls and united the community – rich and poor, people of all races – who were fans. But the name divided community, particularly Native Americans from others. He became ashamed and hid the logos. He then became outraged and approached his rabbi who agreed to co-sign a letter to Mr. Snyder as an appeal of Jews to a Jewish owner to change the name of the team. This was in 2013; no response came from Mr. Snyder.

At around the same time, another-co-founder, Ian Washburn, who also grew up as a lifetime fan, appeared in a front page article of the Washington Post, which explained why he also came to regard the name as an abomination. Through Mike Wise, a columnist at the Washington Post, the Oneida Nation had approached Josh about a media effort speaking out against the name. Josh suggested that the effort involve Ian. We ended up recording a series of robo calls asking Washington area residents to send emails to the NFL and to Mr. Snyder urging a name change.
​
Bill Mosley is a DC resident who received one of the robo calls. Bill and Josh had known each other for a couple of decades and had been local transit advocates. Bill called Josh and asked if he could be involved in the effort to change the name. We realized that we needed to form a grassroots organization so we could increase the effectiveness of our efforts. Ian, Bill, and Josh formed RWF.
Ian explains RWF as an extension of his commitment to Washington DC football. He states, “RWF became a natural outlet to channel my passion for Washington football fandom. Changing the harmful mascot today would be a more enjoyable fan experience than any Super Bowl championship. Mascots deny life to Native Peoples. That’s not fun to root for.”

We have perfected a number of chants over the years when we collect petitions. A visual presence is important. Ian designed shirts with Racialslurs on the front and the dictionary definition of R-skin on the back. Ian also made large posters. Each year, we collect between 1,500 to 2,000 signatures from anyone who wants to sign but particularly residents of the District of Columbia, Virginia, and Maryland.

The effort culminates each year with a petition delivery to R-skins headquarters each December. RWF and our Native American allies conduct a press conference that features brief remarks of RWF members and allies. District of Columbia Councilmember David Grosso (I-at large) has been a regular participant at our petition delivery. Mr. Snyder sends his general counsel to collect the petitions. We know him as “Will” who is an amiable fellow that stands quietly at the edge of the press conference and then politely receives the petitions and shakes our hands. The press conference ends with Native American singing and dancing to show the team personnel the authentic culture of Native Americans as opposed to the fake culture and stereotypes perpetuated by the team.

Over the years, the petition gathering has enabled RWF to engage several thousand DC area residents. Over ten thousand residents have signed the petitions and several additional thousands have seen us on street corners. This is a public awareness and education campaign. We hope it will increase pressure on Mr. Snyder to change the name. We hope the campaign shows Mr. Snyder in tangible ways that the name is a racist anachronism coined in the 1930s by the first owner, George Preston Marshall, who was a bigot and a showman. We hope that local area residents make their views known about the unacceptability of the name by not buying team gear, by signing the petition, and by following the team less.
RWF cannot prove cause and effect in a quantitative manner but ticket sales are down and attendance has declined. When interviewed, local area residents are more likely to refer to the name controversy than they were in decades past.

RWF co-founders have different views about patronage. One of us has completely stopped watching football (Bill), one of us has discontinued watching the team and only watched one full game last year, the Superbowl, (Josh), and one of us watches the team but hopes they lose (Ian).

This is not easy. All of us were avid fans. Football, as a game of skill and strategy, is fun and fascinating to watch. However, Mr. Snyder has taken the fun out of it by sticking with a mascot that is a divisive racial slur. It makes one ashamed of his hometown and national capital to see a team disrespect a culture, pretend it honors that culture and force players to wear the uniform while at least some of them privately disapprove. Former offensive lineman Tre Johnson has spoken against the name. Art Monk and Darrell Green straddle a careful line but do not signal unambiguous support.

The team had a great tradition until Mr. Snyder took that away. Bill has also focused on the damage football causes to human brains. This is a reason Josh has tried to dramatically reduce his patronage of a sport he once loved. The three of us will always regard players like Doug Williams, Art Monk, John Riggins and Darrell Green as heroes because of their grit and hard work. That legacy will always be with us.

As well as gathering petitions, RWF engages in other education and pressure campaigns. We work with religious institutions asking to speak to their congregations and seeing if they will write statements against the name. We work with local Mayors, County Executives, and city councils and ask them to pass resolutions against the name and to publicize these resolutions. We have reached out to media stations and personalities and have asked them to discontinue the use of the team’s name. We have dialogued with local columnists. One of them with which we engaged in dialogue, Barry Svrluga, recently announced in a column that Mr. Snyder should change the name.
RWF also produces educational material. We have conduced literature reviews and written white papers about the mascot issue.  We produce videos of the annual petition delivery and put them on our website. Continuing the theme that visuals are important, we engage professional photographers and videographers at our events. We prominently place their work on our website.

RWF is in this for the long haul. We hope Mr. Snyder changes heart soon. This is our first desire as it would be an epiphany and an act of humility on his part. But if this does not happen, we hope he experiences so much moral pressure that he concludes that he has no choice to change the name. As a businessman, he may also realize that the reputational risk is too great and that he could make more money selling merchandise associated with a new name that the community helped to coin. The late owner of the Wizards, Abe Pollin, who was also Jewish asked the community for input as he was changing the name from Bullets to Wizards. We ask Mr. Snyder to follow this venerable example.

This campaign may take time. Advocacy is not easy. It took civil rights advocates decades if not centuries to get the right to vote, to outlaw segregation, and for the country’s courts to recognize gay and lesbian marriage. We understand that victory is not only measured by a name change but by changing people’s minds, one mind at a time. With this perspective, we are confident that we are victorious every day. We invite you to share in our collective triumph of human understanding and celebration of diversity.

Diversity is our nation’s strength. It must be celebrated in genuine ways instead of denigrated with slurs and stereotypes. Join RWF in those aspirations. Sign our petition, spread the word, and send a note to the team and league that the name of the team is unacceptable.

Sometimes a person of color will approach us on a street corner as we gather petitions and tell us that it is impressive that three white guys care so much about this issue. We have to. We are human. We hope we are helping.
​
Thank you for reading and listening.  The team changed its name on February 2, 2022. Now we are fighting other racist mascots.